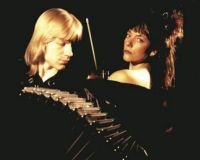 An evening of Russian folk, Gypsy, Tango and Foxtrot music from 1930’s plus some unique pieces written by Igor Outkine. Guaranteed to transport you from the fairytale Russian Steppes to the Gypsy Campfire, from streets of Argentine to Ballroom dance hall. Full of Russian soul and Gypsy Passion.

Igor’s mastery of the midi accordion FR-7x gives him the ability to sound as a variety of different bands from a jazz trio to a big band, from a tango orchestra to a rock band.
Mazaika have given concerts and cabaret performances at Concert Halls and Music Festivals throughout Britain, Europe and the U.S.A.

They also performed in venues like Café de Paris, Madam JoJo’s and Bethnal Green Working Men’s Club.
Mazaika’s Cabaret performances at the Edinburgh Fringe 2005, 2006 and 2009 were greatly received to high critical acclaim.
They recorded with Soft Cell’s lead singer Marc Almond and have appeared with him in concerts.

‘Hugely entertaining? the duo frequently brought the house down’(Scotsman)
‘An evening of magic and passion’(Independent)
‘His singing and accordion playing demonstrate almost every musical genre you can think of.’( www.one4review.com)
‘A lovely tenor voice? The Purcell Room became a tavern’ (Independent)
‘A real sense of pace’(Herald)