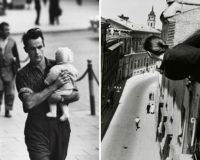 Sutkus’s series People of Lithuania is considered one of his most important works. It is a continuing project begun in 1976 to document the changing life and people of Lithuania. Working at the time when Lithuania (as the Lithuanian SSR) was part of the Soviet Union, Sutkus focused on black and white portraits of ordinary people in their everyday life rather than the model citizens and workers promoted by Soviet propaganda. Sutkus had an opportunity to spend time with Jean-Paul Sartre and Simone de Beauvoir in 1965 when they visited Lithuania. One image, taken against the white sand of Nida, is highly regarded as capturing Sartre’s ideas.

This exhibition at Pushkin House celebrates the photographic achievements of Antanas Sutkus including a recent commission for The Photographers Gallery called The World in London.

The World in London is a celebration of Londoners and demonstrates photography’s ability to capture the human form in interesting and distinct ways. The project is organised by The Photographers’ Gallery and forms part of the London 2012 Festival, the finale of the Cultural Olympiad. The Photographers’ Gallery is the largest public gallery in the UK dedicated to photography. For more information about the project and its participants please visit the website.

This summer you can see the exhibition The World in London in Central and East London: